The BFI Film Audience Network’s Inclusive Cinema has launched a practical guide for improving the cinema experiences of ethnically diverse audiences, and staff, which challenges institutions to make good on their Black Lives Matter and anti-racism statements from 2020.

Inclusive Cinema is a UK-wide project funded by the BFI Film Audience Network (FAN) through the National Lottery to support exhibitors in welcoming everyone to participate in cinema, by countering cultural, systemic or physical barriers. The new guide ‘Dismantling Structural Inequality in Your Cinema’ was commissioned from artist and freelancer Sadia Pineda Hameed and focuses on the cinema experiences of ethnically diverse people, with reference to intersections including gender, sexuality, disability, income and class.

From immediately actionable tools, to encouraging inner, reflective and dialogue-based work towards undoing systemic injustice, the guide is intended to create lasting change for future generations, and sustain organisations in a meaningful way, cited by its writer as “the last toolkit that cinemas should need” when it comes to making their spaces truly inclusive of and led-by ethnically diverse people.

Speaking at film exhibition conference, This Way Up, in December 2020, Sadia Pineda Hameed, author of the guide said: “This toolkit wants to help you within your cinema or organisation to dismantle historic, powerful and violent structures; it’s not about reforming a single workplace but actually creating a more sustainable sector. It’s about decolonisation not diversification. The toolkit does not prioritise visible diversity and inclusion, but prioritises making sure exclusion can’t exist in your space … Share it with your funder and ask your funder to hold you accountable to it, and vice versa.”

The toolkit examines the role of cinemas in the context of systemic injustice and focuses on preventing harm towards people of colour as audience members, staff and creators who exhibit their films, and arrives in tandem with Dogwoof’s latest release, charting Martin Luther King Jr.’s mistreatment by the FBI, MLK/FBI, available in virtual cinemas and on demand, from 15 January.

As audiences connect the dots between the seeds to Black Power rising from the ‘50s and ‘60s, to Black Lives Matter in 2020, the vital reminder is that institutional and structural racism are still endemic issues within our society and culture, requiring multiple strategies and committed action.

Toki Allison, BFI Film Audience Network Access Officer, who oversees the Inclusive Cinema project, explains: “Many cinemas have made statements recognising that structural change is essential after the resurgence of Black Lives Matter bringing racism forcibly into the public consciousness in 2020. This toolkit provides short and long-term actions for organisations to take, to show their true commitment to not only making statements, but taking anti-racist action to create an equitable space for Black, Asian, and ethnically diverse talent, curators, staff and audiences. It’s a comprehensive and inarguably uncompromising document, but it will only be effective if organisations take it, absorb it, recognise the deep work that needs to be done, and get on and do it. I’m looking forward to seeing real change happen, including true accountability from white-led organisations who give up their power and make way for ethnically diverse leaders, makers and curators to share stories in their own ways.”

Rico Johnson-Sinclair, director and founder of CineQ, and festival manager at SHOUT Festival, who was consulted in the creation of the toolkit, said: “There's been a bit of work in the film industry generally over the last couple of years. And whilst this work is formative, it's still optional and very base level. While the industry is debating whether or not to even implement systems of equality within their organisations, people of colour from all perspectives are put on the backburner time and time again, in lieu of something, anything else, that seems to take priority due to its rise in the public sphere. As this happens, whole generations of black and brown storytellers, creatives and hard-working film-lovers are cast aside to protect a casually and subversively racist status quo. This toolkit not only helps organisations to acknowledge systemic racism happening in their backyards (within a film industry that was built during a time where the only representation we had was given to us by white people), it also shows us a path to valuable self-learning; to implement change across the team to ensure that as the conversation changes and evolves amongst marginalised people (which it will inevitably do), organisations are able to keep up. Instead of performative, this toolkit champions the formative and sustainable.”

Alex Misick, programme coordinator at The Centre for Contemporary Arts, Glasgow, who has begun the work to structural change in their venue, said: “I like how the guide doesn’t pull any punches, and is quite explicit about the politics that underpin so much of what hopefully, should be a historic approach. One of Sadia’s key points is that this isn’t just a strategy to be implemented from the top-down of an organisation. These are conversations that need to happen between staff, not necessarily led by senior management, and to be implemented at an individual level… Instead of following capitalist logic of doing more, this is a moment to take a step back, and to recognise there’s a rupture in consensus and let’s not go back to normal.” 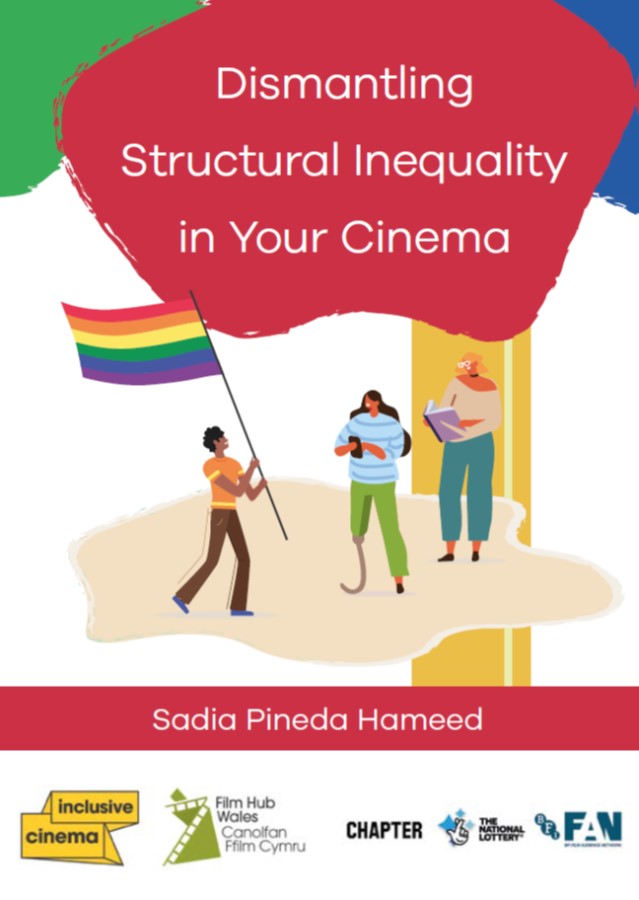